Post examples...
Of framing styles or techniques that rocked your boat, and also of those that didn't
Post Reply
3 posts • Page 1 of 1 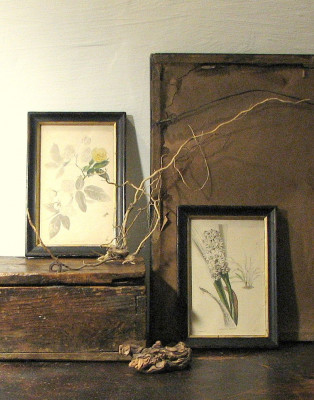 There is a huge cost advantage here in that a leaf of gold costs £1.05 whereas a same sized leaf of silver only costs .15p.

To make the frames I covered the whole profile in gesso and followed with a couple of coats of red bole.
After the usual smoothing and polishing, I water-gilded the sight edges with sterling silver leaf. When dry, these were burnished to a high shine.

The mecca varnish was made with some French polish mixed with gold coloured spirit stains.

After varnishing, the gilding was masked out and the remainder of the frame stained with a ruby/black shellac varnish.
Affordable Gilding Course for Professional Framers-https://www.dermotmcardle.co.uk/
https://www.instagram.com/dermotmcardle/
Top

I really like the sound of that. I am thinking that the ruby / black varnish would be a very nice mellow muted colour and perhaps a bit Victorian looking. The Mecca gilding would look great I am thinking as well. I'm quite into adding black to reds, blues and sometimes to yellow ochre. My idea is probably not anything like the same effect, as I mostly looking to add a bit of a muted dullness.

This is the fist time I have heard about Mecca gilding. Thank you for educating me about something that I knew nothing about. It's nice to be able to say that I've learnt something today.
Mark Lacey

Return to “The Good, The Bad, And The Ugly”