A customer has shown me an interesting item which has passed down through the family, which was a framed 3-D sculpture in wax. It was the inside of a church, showing the organ and choir stalls, with variation in shades of brown and cream to show the woodwork and organ pipes. It wasn't very big, probably between A4 and A3 size. It was really quite detailed and very clever. I can't find anything like it online, but I might not be using the right search terms. Has anyone ever come across anything like this? Just interested to find out more about the technique, and my customer would be interested too.

Just Googled wax relief sculpture, are these what you are looking for
https://www.google.com/search?q=wax+rel ... QCg#imgrc=_
Steve CEO GCF (020)
Believed in Time Travel since 2035

Thanks for that, Steve. The framed job looks like the attached, although obviously not the same subject matter. I've been able to follow a few links from that image and find out more about the technique, thanks. 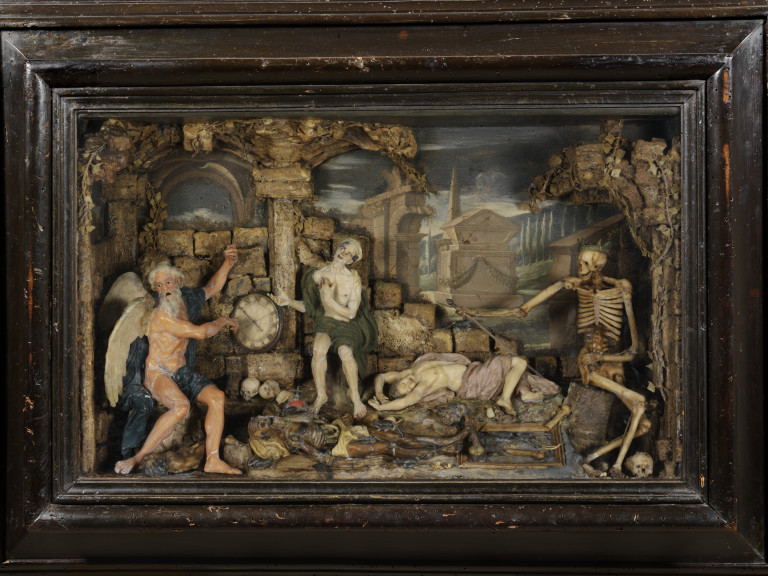 That's a diorama, which is made from separate parts, where as the link I sent was a relief which start as one bit of wax and carved to show the relief features and mostly all the same colour
Steve CEO GCF (020)
Believed in Time Travel since 2035

Diorama, eh - the plot thickens! I'll have to ask to have another look at it to see if it's been made out of separate pieces or out of just one piece. I'd assumed it was just one piece but there are some variations of colour so perhaps it's separate pieces. Thanks for the further info

Interesting art media wax. Restoring old cases, was a pastime that bought contact with a few. As wax is translucent it can impart a depth that can be varied by adjusting the opacity with the pigment added to it and it would seem that the better artist used this with surface colour as well.

Collectors Cases made a series of frames for some modellers of wax flowers, possibly early 1980's, two ladies, stand out in my mind, former employees of the Constance Spry organization, before the silk flower trade completely shut down a commercial outlets for this craft. I remember a Meadow Orchid, modeled by one of these ladies (commission fro a museum) and the hand painting over the translucent base colour was superb.

Some of the Victorian glass dome display, those floral and fruit 3D still life's used wax modelling over fine glass blown base shapes. Had the framers skills and adventurism advanced with modern materials, some of this non durable art forms might still be practiced.
Top

I've seen items like this in house clearance auctions and flee markets, I've never given them much thought until now, are they worth anything? I far as I can remember, they generally can be had for very little money. I've always suspected that there's no money in them.

They remind me of those Anton pieck decoparges that used to be popular in about the 1970's to 1980's and there's no money in those any more either. The younger generation don't buy stuff like that and the pensioners that once bought stuff of that ilk don't seen to be around here very much any more.
Mark Lacey

There has been quite a shift in the commercial nature of house clearance auctions, but the previous post reminds me of how I started. I was not making a good enough living in the family farm business, so I started to augment my income from a bit of dealing, the relationship between livestock and antiques close in those days because the same auctioneers sold both.

I started framing 3D stuff partially through an interest in taxidermy and also salvaging interesting ephemera from such sales and then putting them back in auction, usually a different auctioneer in another location. This way I learnt, who were the buyers. Now I have noticed that framers tend to judge their marketing on following the popular trend, being a nation of shopkeepers (according to Napoleon Bonaparte) I suppose this is understandable. But there are a few, who slip into niche markets, not popular with the mainstream, directed by the suppliers, who want an ever increasing sale of popular frame lines, mountcard etc.

What does this have to do with wax sculptures, I would have used the term wax modelling and there is a parallel with picture framing. Watercolours need more protection than Oil Paintings and are less durable, term I have coined is non-durable art. Find non-durable art and learn to protect and present and is there a market?

During a stay in Edinburgh, I visited the medical museum. I was fascinated by the wax modelling for medical instruction and research from the 19th century. In order to make these fragile exhibits into teaching aids they had to be framed. I got to talk to a guide and I was taken to the backdoor of the museum (tight security) and he bought a broken example and asked if I could repair it. It was a method of making a case I had never seen used in just this way. It was repairable but as I was retired and had dispersed my workshop, I was unable to help.

A few days before I had called into a framing shop and had a pleasant chat with a very hard working young lady, not a posh shop but a lot going on. We talked about 3D framing and she told me she got a lot of requests from art students for such work for their finals. She did not have the space to assemble even small ones, using the methods most framers seem to pursue, but that 19th century display, held a clue how she could have done work for that potential market.

Sadly it seems to have been a closed subject.
Top
Post Reply
9 posts • Page 1 of 1

Return to “After Hours”