Morso guillotine - cutting poorly all of a sudden

Morso guillotine - cutting poorly all of a sudden

I purchased an old Morso guillotine a while back and have been slowly cleaning everything and figuring out how it all works. He's an old boy, I think 1953.

I've got about 8 sets of knives with it, some quite old but some that had just been sharpened. I set it up with a pair of the nicer knives and calibrated everything. Everything was cutting smooth with nice clean edges until last week when I went to make a cut and the knives felt like they were pressing through the wood rather than cutting it. 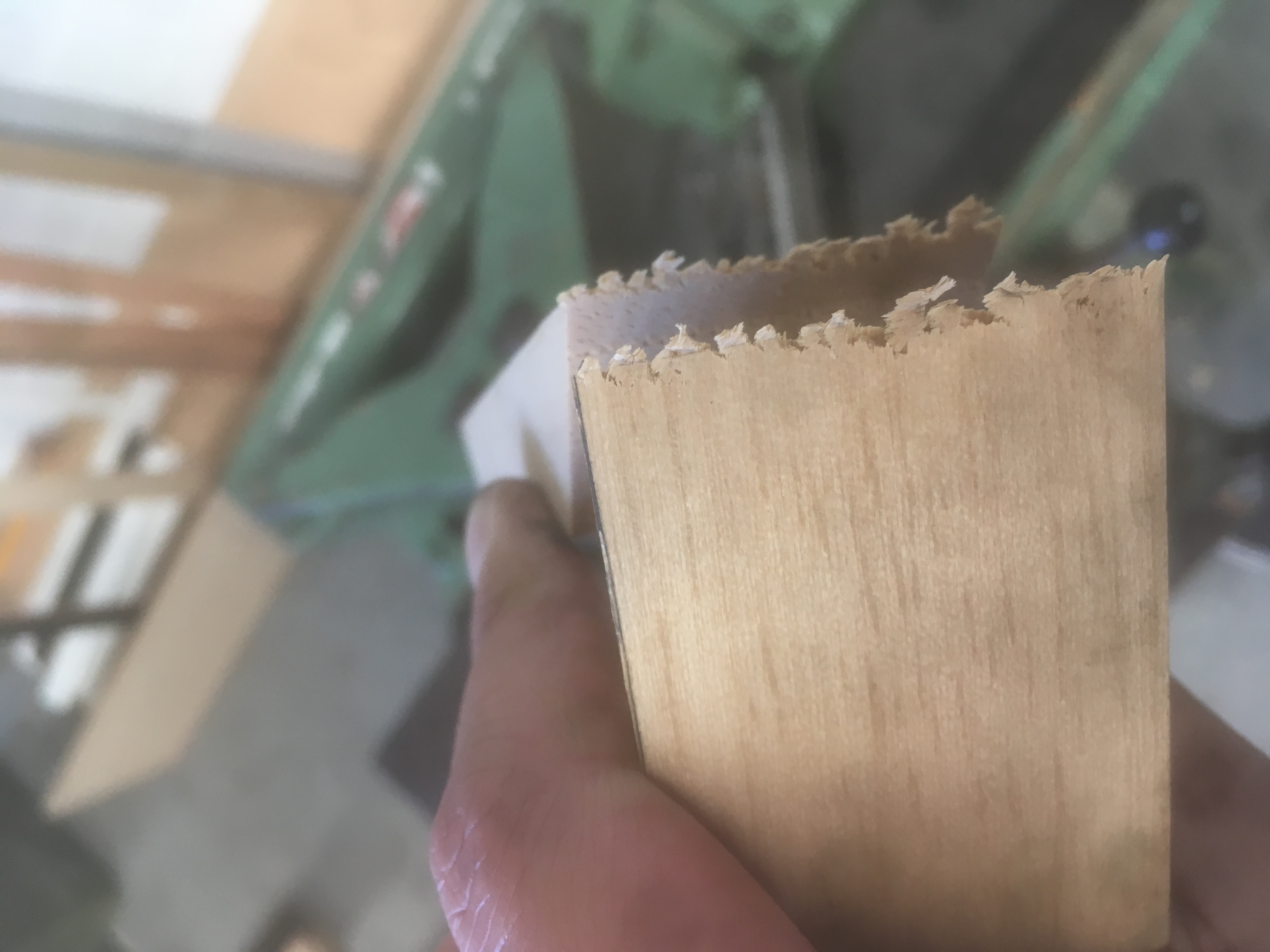 At first I tried lots of different moulds, even super soft pine which usually cuts like butter but the same issue. I then went through a whole stage of refitting the blades, then aligning the bottom knives, checking the fences for squareness, adjusting the bottom bolt and moving the bracket forward until it's sitting nicely between the fences. I've even tried multiple sets of knives but keep having the same problem.

I've just sent off my two best pairs of knives to be hollow ground and will hopefully have some better luck but in the meantime does anyone have any ideas or has seen this problem before? I'm at a loss as to why it would happen so suddenly and without a reasonable cause.

Thanks in advance and good to be here!
Top

You seem to have a problem there...

My first thought was bad wood, but if it does the same on different sticks then the blades come into question.

Wait until you get your two sets of blades back from sharpening and see if there is any improvement. Sharpening the blades has
to be done to quite exact specs. Does your sharpener know how to do them correctly?

In the meantime you could try inserting a thin sacrificial strip of flat timber (MDF?) against the fence and cut with the back of the moulding
against it. This way the back edge is cut with a different section of blade and is fully supported. (this will screw up the measuring but you can allow for this)
Watch Out. There's A Humphrey About
Top

Blades don't usually go blunt enough to do that over night! I would suspect something else is happening here. First I would try some known good moulding of another variety, (preferably not pine), after all yoiu've shown us some bad results with pine, let illiminate the pine from the list of prossible causes, while we think about what else to illiminate next.

It was a reasonable idea get some more blades sharpened to prove the point, but the results cutting the pine mouldings have got really very bad indeed in an extraordinarily short period of time, which suggests to me that I would try a different moulding first, as this could quite easily explain what is causing the problem.
Mark Lacey

So the blades are being properly hollow ground by a reputable grinder so hopefully it will be the answer to my problems.

As for the moulding type, here's a picture of the exact same moulding (from the same metre peice) one was cut a week ago, one was cut today with no changes to the machine, at least that I'm aware. 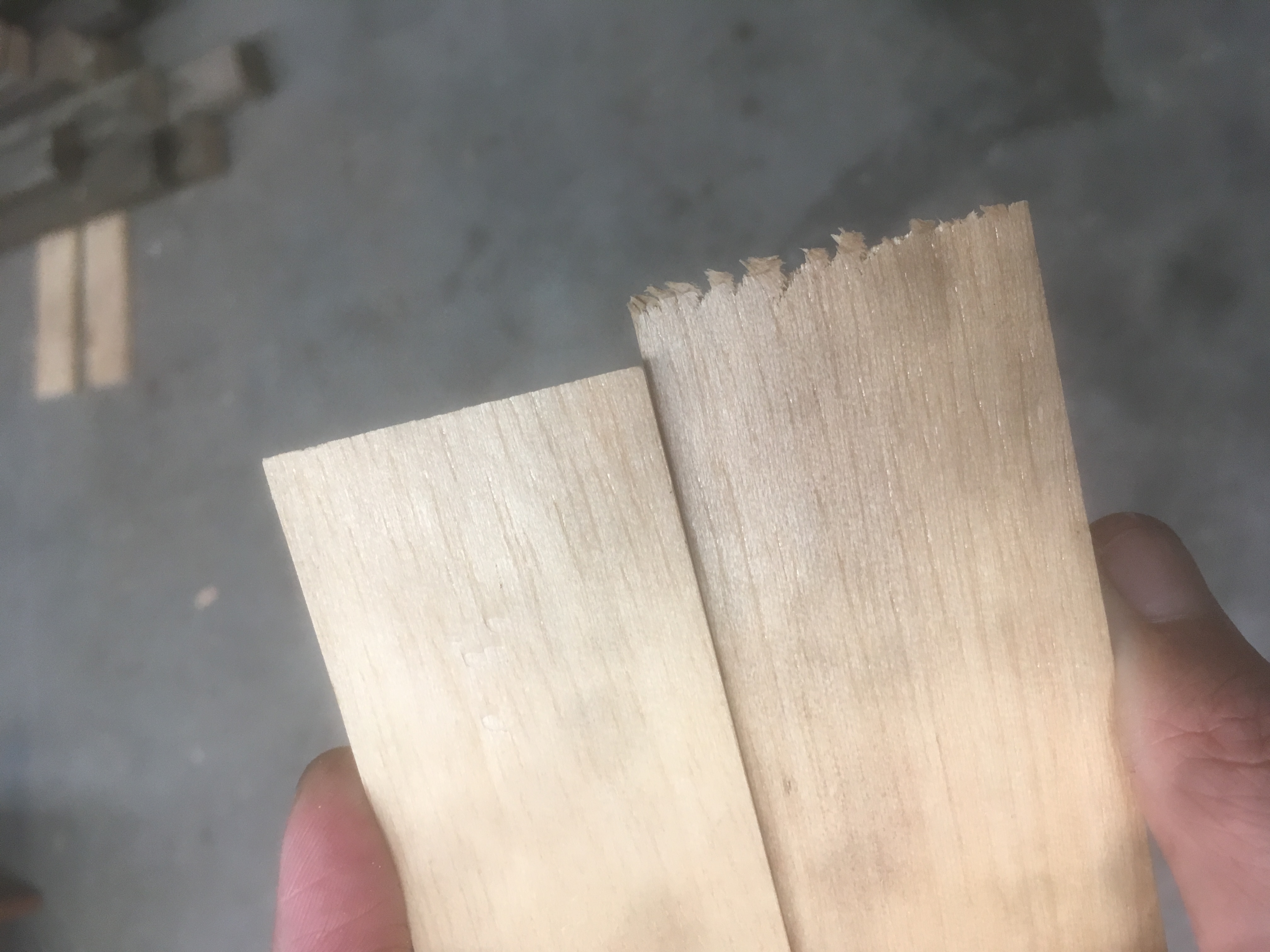 I've tried a Black moulding that I had lying around and it actually cut quite well but every other moulding I have, all from very good suppliers and from timber I have routed myself, all turned out the same. This would usually rule out bad moulding but I have cut every single piece of timber I tested today weeks ago and they all cut perfectly. 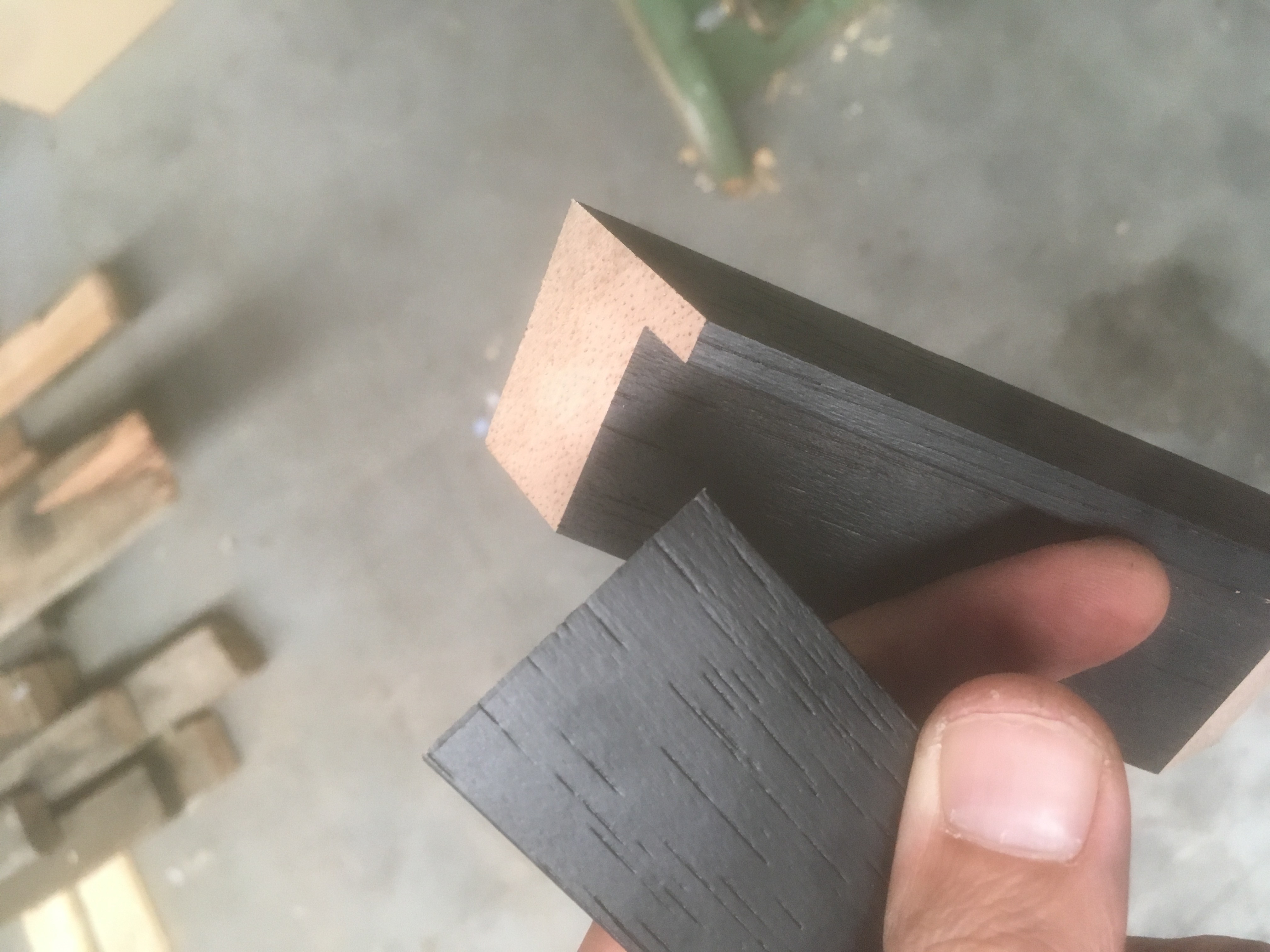 So something has definitely happened to the guillotine itself, I just have to figure out what.
I'm hoping it's the blades.
My only theory so far is that the blades may not have been tightened and could have budged from their correct positioning when trying to cut something with a bit of force. I have sent the blades I originally used off to get sharpened so unfortunately I can't refit and test the same blades...yet - and all the other sets I have aren't great.

Thanks for your help though guys
Top

Just out of interest did you try putting a little slip of mountboard between the fence & the back of the moulding. Looking at the photos I'd say your blades needed a sharpen or nudging them forward just a little, also I've had lengths of plain wood cut great at one section and awful at another. Welcome to the world of tearing your hair out.
Top

I can't really say for sure what type of wood your moulding that is not cutting properly is made from, but I'm guessing that it could be an Obeche moulding. If so, then it is not all that uncommon to find sections within a length of moulding, where for what ever reason the wood ends up cutting like that if you are using a mitre guillotine. Wood which cuts like this is commonly referred to by framers as snot wood, or even Wheetsbix wood.

That same wood would almost certainly cut just fine on an electric mitre saw, but using a mitre guillotine is quite different. It could just be that you've got a bad bit of wood and illiminating other possibilities is the usual way of figuring out where the cause of the problem lies.
Mark Lacey

A new pair of blades is one of my best investments.
Learning how your machine behaves is a bonus.
When your resharpened blades come back, spend the time to refit them as well as possible. Use the morso manual. You need to get them to meet perfectly in the front middle on the vertical join, without any overlap at all. It can take quite a few goes. I find a pair of cheap kevlar grip gloves helps with the process.
Justin George GCF(APF)
https://www.instagram.com/georgetheframer/
http://www.georgetheframer.com/
Top

Hi Holbrook.... did you ever find out what the problem was with your Morso (blades?) I've just had the same happen here!

If blades are good, try moving the cam nut attached to the handle that moves the blades back and forth, this adjustment will make all the difference good and bad.... Good luck.
Top
Post Reply
9 posts • Page 1 of 1