I have been reading on the "Grumble" about this method of attaching the wire to the back of the finished frame for hanging.

D.I.T.H "Direct in the hole". 1st drill a 1/2" hole in the moulding where you would normally fix a D ring.
2 insert the end of the wire
3 screw a pan head screw halfway home
4 twist the wire around the screw and completely drive the screw home. Repeat the other side.

If I read this correctly, a well-known US framer and educator has had framed images on test using method since 2006 showing no adverse effects.

Having never come across this method before I would very much like to hear any opinions, thoughts or experiences

Thanking you in advance.

I have never heard of such a method of securing a wire or cording, for that fact, to a frame rail for hanging.
It all depends on the quality of the wood and its strength as well as the humidity level of where it is displayed. From an engineering standpoint, the wire will have a tendency to be cut by the threads of the screws. There is the unknown regarding expansion and contraction as well as oxidation (rust and corrosion). It is not a liability that I would like to take on not knowing how it will be hung.
Jerome Feig CPF®
http://www.minoxy.com
Top

That's just about the extreme in penny pinching! What do d-rings cost - very little. What's the level of cost saving - ridiculous! What's the customers impression - rubbish!

Who's impressed - Not me.
Mark Lacey

Jerome, do you not read the Grumble, it's a thread that's bean been discussed at length on there

Mark, I always love your replies

but that was outstanding

Please do not think I am advocating this because I'm not. I just wanted to run the idea by our members - that's all.

I did not read the thread on the Grumble.

The guy who made the original suggestion was booted off the Grumble. I had already blocked him from my feed when that post was made.
Jerome Feig CPF®
http://www.minoxy.com
Top

I will admit the D.I.T.H. discussion is difficult to locate on the Grumble. I have found entering those letters in the search box has a negative result

If only I were more competent with my PC, I would display a link, in blue, as others do, directing to the thread.

However, if you can find the thread were a Grumble member asks "where to obtain good quality screw eyes" you will find, in that thread, a discussion about using this method. It goes with out saying, this poor framer got taken to task for using screw eyes, and it was within that thread that I read opinions on hanging frames using the D.I.T.H. method. I will also admit, I found some replies very surprising

I hope that helps.

Jim Miller describes the method using washers and shows some photos further down in the thread.

Peter, when I first read your post I thought you were talking about drilling a hole 1/2" in diameter

I've never used wire so will stick with cord and D-rings.


Not your average framer wrote:That's just about the extreme in penny pinching! What do d-rings cost - very little. What's the level of cost saving - ridiculous! What's the customers impression - rubbish!

Who's impressed - Not me.

I agree with Peter... outstanding reply

"You know, there's a right and wrong way to do everything!"
Oliver Hardy.
Top

I skimmed over that thread on the G and I thought it was a method of attaching a wire to a diddly moulding where
there isn't enough room to fix a d-ring.

In any case if there isn't room for a d-ring then the frame probably wouldn't support the whole package and the hangings
would be batter fixed to a (sturdy) backboard.
Watch Out. There's A Humphrey About
Top

Peter, you are not wrong, there is a thread about attaching a wire to a diddly moulding where there is isn't enough room for a D-ring and you are right again about there being a better way to support the package by fixing to a sturdy backboard.

David, sorry to cause confusion by excluding the word "deep" when drilling the 1/2" hole, and thank you for the link to that lengthy post.

Looking again at those photos of the wire, washer, and screws and after reading the arguments in favor (on the Grumble) I am convinced this D.I.T.H method has very little merit.

When a customer comes to collect their framed artwork and is shown the finished package I always have swung it around (if not two hefty) to show the back. There is no way could I show a customer a frame finished in this way without feeling very embarrassed.

My father was a licensed architect and structural engineer and did watercolors as a hobby. He made his own models of buildings for clients as well as watercolored renderings. I had some training from him leading over his drafting board. Therefore, I have a slanted way of looking at things. My first approach is always from an engineers eye and I skip over a lot of hairbrained ideas.
Jerome Feig CPF®
http://www.minoxy.com
Top

So how do you determine what weight of picture that this methon of hanging will support.

(1) One particular variable to be considered in connection of determining the loading that wire will support using this method is going to be the strength and the density of the frame moulding.

(2) Also how do you determine the most appropriate drill diameter to suit any particular size of screw, together with any particular thickness of hanging wire.

(3) After screwing the screw into the hole, how do you know if the wire has been cut through by the rotation of the threads of the screw biting into the wire.

Anyone want to offer any suggestions regarding the longevity of such a mounting arrangement? I think we may be talking about guesswork at best.
Mark Lacey

Good to see someone thinking outside the box. Here’s me beleiving that I knew it all, but I’ve never heard of this before. I’m embarrassed to say that, even though on a good day I consider myself of average intelligence, in over 30 years of framing I never thought of this.

Don’t get me wrong, I’m not about to give up on the trusty D-ring as my go to fixing, but there may be situations where DITH might be useful. However the limitations of this method may dictate that I never actually use it in real life.

Yes it does solve the overhang problem that I get when using a D-ring on a narrow moulding, but:
OK, there's not much love for DITH here, but whoever dreamt it up should not be discouraged, maybe their next idea will be a real winner!
"A little learning is a dangerous thing"

I've seen a lot of hangings that have been attached by DIYers. Some of them are very conical. Bits of cotton wrapped around
drawing pins. Staples. Washing line. This idea seems to stem from a similar source.

I've seem a lot of other 'improved' framing methods promulgated and without exception they involve a lot more work than
doing it in the time-honoured way. That's not to say that I'm not open to new ideas, but jamming a wire into a hole and locking
it in place with a screw is what I would term a 'lash up'.
Watch Out. There's A Humphrey About
Top

"A little learning is a dangerous thing"

Thought I'd give it a go and test this idea for myself. 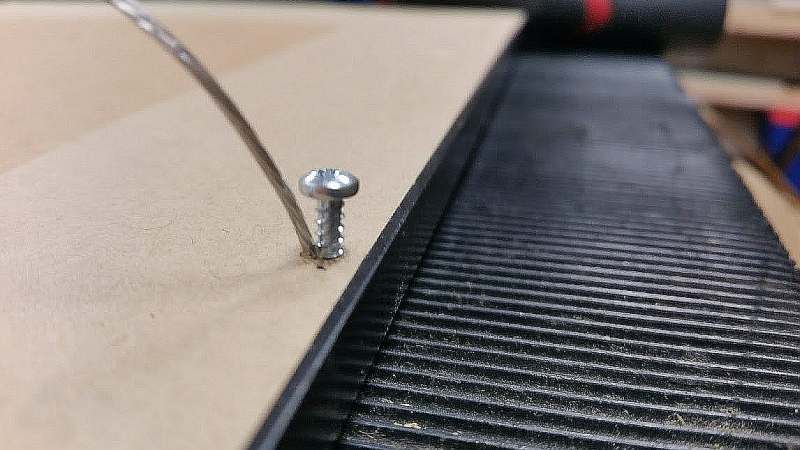 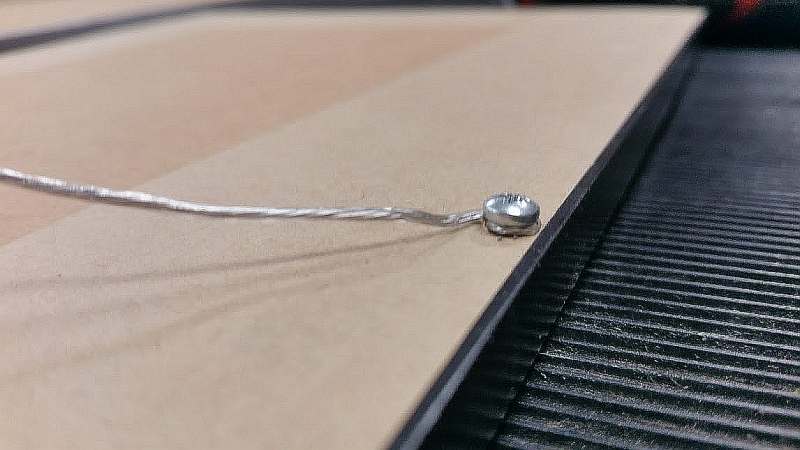 I thought this would look cheap and ugly, however it looks OK, kind of neat
No visible wire twisting or knots. 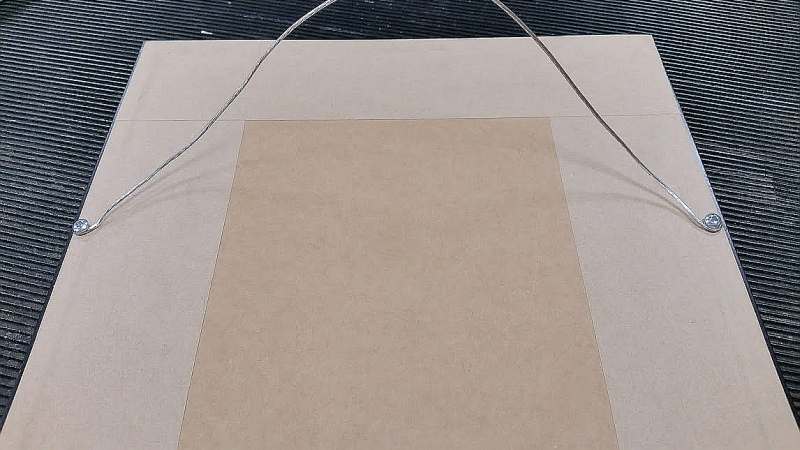 Load Testing
This shows the frame supporting 3 paper covered concrete blocks which we use in the
workshop whenever stuff needs to be weighed down. They are 6.5 Kg each.
Total test weight 19.5Kg or 43lbs. Maybe one day I'll test to failure, but my guess the
frame will easily support twice this weight. 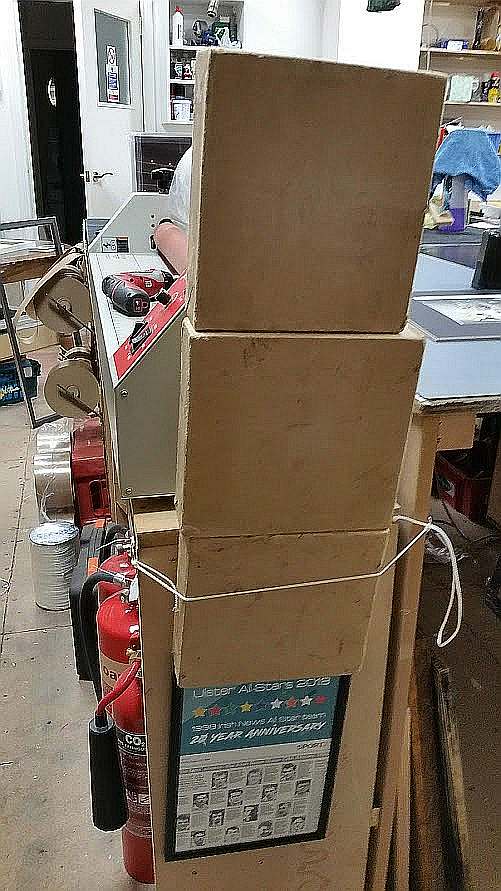 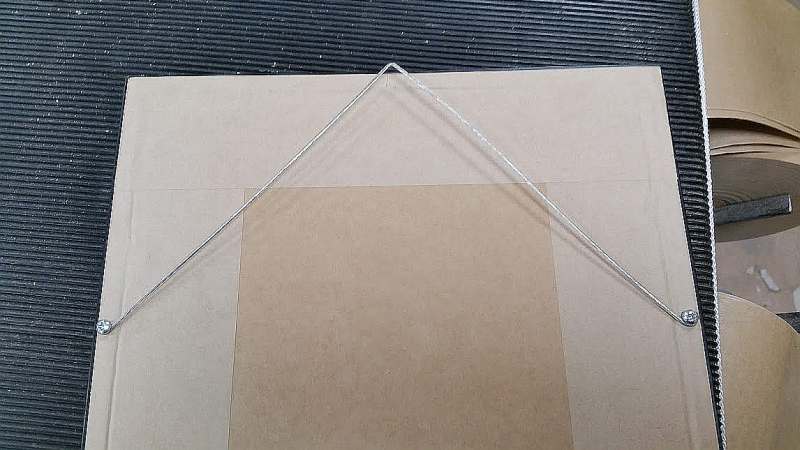 This test was just to satisfy my own curiosity but I thought I'd share it with everyone. I think it shows that while it has its limitations, the DITH idea is not completely crazy.

In conclusion: Will I be using DITH? Probably not, it is too time consuming. However I'd be queueing up to buy a (cheap) hand tool that would automate the job.
"A little learning is a dangerous thing"

I have a few engineering questions with your test.
Jerome Feig CPF®
http://www.minoxy.com
Top

The thought occurs that it might be fine most of the time, but eventually there would be a frame that was just a bit heavy and
a screw that bit too far into the wire.

In terms of economy, I could fix two d-rings and attach the wire in less time.

Jfeg
I am assuming that yours is a genuine quest for enlightenment and not a prelude to some sort of passive-aggressive down the line gotcha. I assure you that no trickery was involved and I have reported my genuine findings without any exaggeration. Like I said, my conclusion is that I’ll probably never use this method, but it is interesting and, as I think my experiment shows, does not deserve to be dismissed out of hand

You must not have understood the significance of “A4 frame” in the caption of the first image. It refers to the frame size. And with that knowledge I think with that anyone with an engineering bent, such as yourself, should be able to work out the scale of the photos and deduce the answers to some of your questions.

But, regarding the questions with answers that you might not be able to deduce: 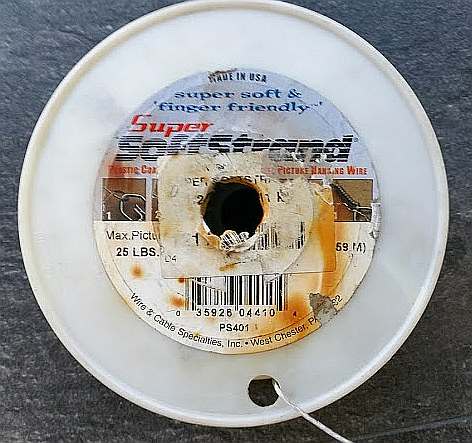 Wood
Sorry, don’t know the type of wood, it is hard though, like I said it should be in my earlier post. The profile is 12mm high and 9mm wide at the base.

How deep is the wire inserted
Are you really asking if the wire was inserted deeper than the pilot hole?

Amount of torque
Really Jerome? How do you want it, lbf ft or Nm? Either way I don’t have a clue.
However: the screws were tightened just the same as any other, such as when screwing in a D-ring.
"A little learning is a dangerous thing"

That's interesting and appears to stand up to load bearing quite well, but I'm not completely happy about how customers would perceive this as reflecting on my own reputation, if I ever used this method.

For me, I will still go for d-rings, but I would not rule out using the technique for future work that I might intend selling in local auctions, if I had anything worth auctioning.
Mark Lacey

No offense to your questions and my questions are from an engineering standpoint. It was a good form of test.
Am I correct in assuming that the length of the screw thread was 10mm?
The type of wood would indicate the ability of the screw to not pull out.
The wire depth is important regarding the total amount of contact (grab) over which the screw contacts the wire. All the way in or part way would have sufficed.
The strong torque compression between the screw and the wood can transfer the load from the threads to the head of the screw.
Attached is a link to the wire manufacturer. #4 wire. The heavier the cable the more stands there are that make up the cable. If some of the cables are broken, there are still some wires left to support the load. The cable just looked a bit thick to me.
https://wire-cablespecialties.com/colle ... 5070257291