Mark - if you don't have a telly, what do you point the furniture at?

I like european version of Wallander too. Tried Branagh version but not for me.

Poliopete - my wife like all the blood and gore type films which i don't enjoy. I think having had 16 operations in last 13 years, i get enough at home.

We are watching reruns of law and order, never watched before but a fair few of them are quite thought provoking.

She had me up against the Aga.

"Man in a Suitcase"!!! I was just a young girl at the time and had a major crush on Richard Bradford

Mind you, I've since seen an episode on Youtube and... well, let's just say it was of it's time!

Columbo - the best detective series ever

Am I the only one who noticed "Man in a Suitcase" stand his ciggy on end/upright on the table? I must have been very impressionable because it started me smoking

And the BBC destroyed the tapes containing of much their work....AFTER Peter Cook had offered to personally pay for new tapes instead.

What's the betting they'll have every episode of stuff like 'Doctors' in 500 years time?

The '70s policy at the BBC was to reuse tapes as many programmes were under an Equity restriction had they could
only be repeated once. The tapes were £600 each. That was a lot of money in 1970. Therefore the recordings were
considered of no value. Some survived only as telecine recordings that were sold to foreign stations and subsquently
recovered. Series 2 of Dad's Army was wiped. Only 3 of the six survive and 2 of them were recovered from a skip.
GOLD (part owned by BBC) recently re-created the lost episodes using the original scripts. Not a bad job they made.

At the same time, Bob Monkhouse was taping shed-loads (he kept it all in a shed, too

Always ahead of the game, that lad.

I had four plumbed in at one time. I even had a digital one that could record 21 hrs on one tape.

Been watching a Youtube channel with a guy and his wife buying golf clubs at 'thrift' shops, to then sell on (I must get a life). Anyway, he reckons a mate of his makes good money buying and selling DVD/VCR combo machines. I wonder why: I get why vinyl records have come back (sound quality etc.)....but VHS tapes?!

DVD recorders had a short span. The recording part works for while and then is kaput. I've had two. They will continue
to play discs, but that's it. A bit the same with tapes, but it's the tapes that degrade. They can be played, but not recorded over.

Same with my Laser Disc player. I've lots of discs, but my player won't play them. They had even shorter span.

These are just DVD players with video recorders (in one unit). I had one years ago (silver, it was), but gave it away when we got the DVD / hard disc recorder. Lord knows why there's money in buying and selling them in the USA!

Having a minor panic, as they seem to have stopped making dvd/hard disc recorders

. Might have to stock up while there's still some around!

"DVD players with video recorders in one unit" they sound the business.

I happened on a cute little gizmo a while back.....

You connect a source to the input (in my case a Sky+HD box) and connect the output to the TV. Any signal going though it
can be recorded to a USB memory stick which plugs in the side. Then you can play it back. Or unplug it and plug it into another TV.
Send it to Peru - whatever. Plug it into a PC and you can edit it. I chop the adverts out.

Make as many copies as you like.
What's more, if you play recordings or downloaded programmes on the Sky box you can record them the a memory stick to archive them
and free space on the Sky box. This is handy because certain downloads are time restricted and get deleted on a certain date.

Whats more, it can record a HD signal. Trouble is, these files are HUGE. But you can get a lot on a memory stick and they aren't as pricey
as they used to be. I also have 3 SSD external drives connected to my PC which gives me total storage of 3.5 TB.

Hell's bells Peter, you're good with tech (did we ever get the 'I'm not worthy' emoticon?!).

Love to know what that thing is called, please - if it ever pops into your mind. 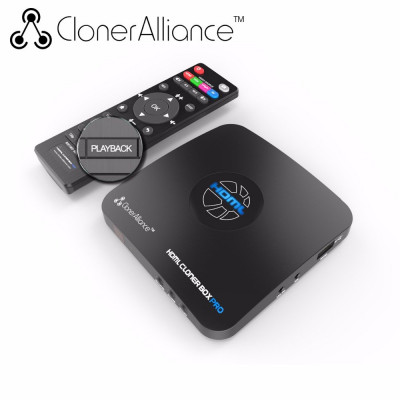 I got another piece of kit. MP3 player. One of those things that you have ear-plugs and listen to music as you go about you daily round.

). It has a humungus sound system with 14 speakers. As well as
radio/cd is has an 'Aux' input in the form of a 3.5mm jack. Hope to plumb it in shortly. To cold to go out atm. In theory the headphone
output should provide a signal that the Aux will accept, but that remains to be seen.

One thing confused me though. The instructions where quite extensive. Such useful info as "Don't use Benzine to clean it with".

Glad I was told that as that was my first impulse as soon as I took it out the box.

One thing the instructions failed to explain is how to charge the damn thing. Not a mention.

It transpires, after contacting the supplier,
that connecting it to a PC to load it with files also charges it. Fair enough. They might have mentioned that fact.

Thanks so much, Peter. I'll be checking that out thoroughly!!

BTW, I'm sure i voted for the Cloner Alliance last Thursday

You're a superstar, Mr P.

Paul
PS. Yes, I could never buy that thing.... I insist on cleaning everything in Benzine

I can't watch that in my clapped-out jogging bottoms....I'll have to put a black tie on

Return to “After Hours”